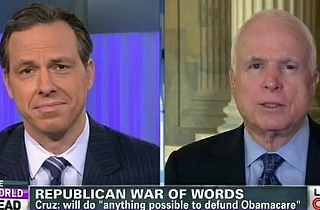 On Thursday, Sen. John McCain (R-AZ) told CNN host Jake Tapper that he believed it was counterproductive for the House GOP to pursue a continuing resolution that seeks to defund the Affordable Care Act. When pressed for his opinion as to why House Speaker John Boehner (R-OH) was allowing a vote on a continuing resolution with that aim, McCain conceded that the Speaker “has great difficulties within his own conference.”

“This is not something that we can succeed in,” McCain said of the effort by some Congressional Republicans to defund “Obamacare.”

Tapper asked why, if the votes were not there, some Republicans were pursuing this strategy.

“Almost all of the people who are doing this are new and do not have the experience that we had when the American people, who don’t like government but don’t want it to be shut down, reacted in a very negative fashion towards Congress for doing so,” McCain said of the government shutdowns of the mid-1990s.

“So why is Boehner doing it? Is he just terrified for his job,” Tapper asked.

“You’ll have to have John Boehner on,” McCain replied.

“You can give me some informed speculation,” Tapper pressed.

“Jake, I don’t know, except that it’s pretty obvious that he has great difficulties within his own conference,” McCain replied. “But I can’t second-guess John Boehner.”