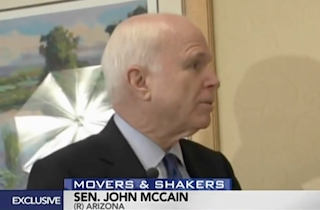 Following the attack in Boston, some politicians, including Sens. Chuck Grassley (R-IA) and Dan Coats (R-IN), advised slowing down immigration reform legislation in order to allow further debate and not make rushed decisions based on emotions. In an interview with Bloomberg’s Trish Regan, Sen. John McCain (R-AZ) criticized his colleagues, deeming the argument “ludicrous.”

Grassley’s remarks on Friday immediately caught attention when he said, “Given the events of this week, it’s important for us to understand the gaps and loopholes in our immigration system.”

“How can individuals evade authorities and plan such attacks on our soil?” he asked. “How can we beef up security checks on people who wish to enter the U.S.? How do we ensure that people who wish to do us harm are not eligible for benefits under the immigration laws, including this new bill before us?”

On ABC’s This Week, Coats said he agreed with Grassley, asserting, “I’m afraid we’ll rush to some judgments relative to immigration and how it’s processed. So let’s do it in a rational way rather than an emotional way.”

“We saw some things post-9/11 that were enacted that if we had had a little bit more rational time to think this through, perhaps we wouldn’t have had some of the pushback on it,” he added.

Asked to respond, McCain replied, “In all due respect to my colleagues, that’s ludicrous.”

“Do we want 11 million people forever out there somewhere in America that we don’t have any idea of what they are doing and who they are?” he asked. “I do not think so. Don’t we want to have secure borders so that we can better control who enters into this country? I mean, I would say that it is a strong argument for immigration reform to be passed as quickly as possible.”

Take a look, via Bloomberg: