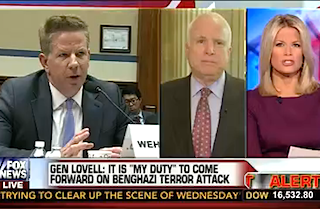 The former foreign policy speechwriter for President Barack Obama has become a target of conservative outrage since it was revealed that he sent an email to then National Security Advisor Susan Rice, instructing her to focus on an inflammatory YouTube video during appearances on Sunday morning talk shows following the attack.

Noting that Rhodes has never testified before Congress on the Benghazi issue, McCain referred to him as the “political hack for the Obama reelect.” The information that the Obama administration put out about the attack shortly after it occurred “was all in line with a reelection campaign rather than the facts surrounding the tragic deaths of four brave Americans,” McCain said. “That’s what is outrageous about this.”

“I think a lot of people would agree with that,” Fox host Martha MacCallum said, before agreeing with him. “I would look at it and say, in the middle of a presidential election, I hope this doesn’t come out the wrong way, but it was an opportunity to be presidential, to show the leadership, to show what happens when America is attacked, to show what your response would be, to show how tough you can be, no?” she asked McCain.

“That’s exactly put,” the senator answered, going even further to accuse the administration of staging a “cover-up.” He also cited the moment in the president’s 2012 debate with Mitt Romney when the “so-called moderator” (CNN’s Candy Crowley) confirmed that Obama had called the Benghazi incident a “terrorist attack,” something McCain maintained was “patently false.” In fact, he used the term “acts of terror.”