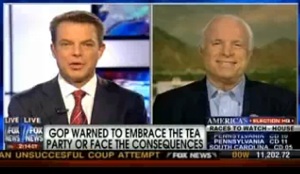 Former Republican presidential candidate John McCain appeared Studio B today, and host Shepard Smith once again demonstrated why he’s among the best in the biz by not beating around the bush in asking Senator McCain if he’d support a Sarah Palin presidential run in 2012. This question came in the context of a Politico report suggesting party leaders were nervous that she would ostensibly pull the GOP too far right to be elected. While McCain lauded Palin and her family, he notably did not come out in clear support of his former running mate.

McCain was understandably unprepared to throw his support behind candidate Palin, particularly since a) she’s not even announced her plans and b) that’s a pretty heavy arrow in his political quiver, and his support of the a future candid is not to be thrown around lightly (else it lessens any future political leverage he can eventually extract for said endorsement.)

However, some cynics might see the following video clip and ask how Mr. McCain could so comfortably put Ms. Palin on his presidential ticket in 2008 — just one heartbeat away from the most powerful seat in the free world — and yet not be able to throw his potential endorsement her way in this interview.

The balance of the interview focuses on specific cuts to the budget that McCain would suggest, and the senior senator from Arizona acquits himself quite well with a spry and pointed response of specific targets and goals that he would like to see in the coming fiscal year.