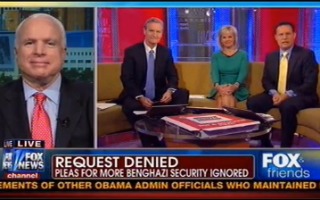 Arizona Senator John McCain appeared on Fox & Friends on Tuesday, where he spoke about his search for answers involving what the Obama administration knew and what requests it ignored concerning mounting tension in Libya:

I think that one of the things that’s most alarm being this whole situation is that it was clearly an orchestrated Al Qaeda-affiliated terrorist attack. You would have known immediately that it was a “terrorist attack” when you use mortars and rocket propelled grenades and a very sophisticated attack. And yet, five days after that attack, they sent out our UN ambassador on all the major news shows, including Fox News Sunday, and said that this was a spontaneous demonstration triggered by a hateful video. No one, no one, no one in position of responsibility should have allowed that message to be sent. And I think we ought to be finding out who is it, who is that told Ambassador Rice to say something which was absolutely false to the American people and why. And so obviously there is other aspects of this, but that alone is really — if you’re going to go on national television on your show and not tell the American people the truth, then that is a degree of politization of national security, which is not acceptable.

The Senator later criticized what he referred to as a “feckless foreign policy,” adding that people in the military are overwhelmingly voting for Romney over Obama.

He also called Romney’s recent foreign policy speech “Reaganesque,” praising him for his instincts and pledge to “lead from the front.”

He took the opportunity to denounce claims from the left that Romney is a “liar” and expressed nothing short of bafflement over the Obama campaign’s recent “Big Bird” themed campaign ad.
Have a look at what he had to say, via Fox News: