Sen. McCain Gets Heated With Hagel Over Iraq Troop Surge, Demands ‘Yes Or No’ On Whether He Was Wrong
video

Sen. McCain Gets Heated With Hagel Over Iraq Troop Surge, Demands ‘Yes Or No’ On Whether He Was Wrong 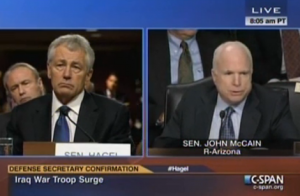 Chuck Hagel‘s confirmation hearing to become Secretary of Defense got heated this morning when Sen. John McCain (R-AZ) challenged him on his past opposition to the troop surge in Iraq. Pressing him for only a “yes or no,” McCain aggressively questioned Hagel on whether he now feels he was wrong.

McCain cited Hagel’s 2007 remark wherein he deemed the troop surge the “most dangerous foreign-policy blunder in this country since Vietnam. If it’s carried out, I will resist it.” He then went on to read a litany of quotes from the past several years, regarding war in Iraq — and asked whether Hagel stands by them.

“Were you right?” McCain asked, to which Hagel began to offer an explanation. The pair went back and forth as Hagel started answering and McCain repeatedly said he wanted know whether Hagel felt he was right or wrong.

“That’s a direct question, I expect a direct answer,” McCain asserted. Again, Hagel began speaking about how the surge “assisted in the objective,” but as he went on to explain further, McCain interjected, asking him to “please answer the question.”

With yet more back and forth, McCain grew testy, pressing Hagel for a direct answer — after which he could elaborate. “Well I’m not going to give you a yes-or-no answer on a lot of things,” Hagel replied.

“Yes or no,” McCain instructed.

“I’m not going to give you a yes or no,” Hagel countered, “I think it’s far more complicated than that. … I’ll defer that judgment to history.”

The comment about the most dangerous foreign policy blunder, he said, was not just about the surge but overall about the “war of choice.” The war in Iraq was a bad decision, he said — noting the cost of the war, as well as how it detracted focus from the war in Afghanistan.

“I think history has already made a judgment about the surge, sir,” McCain said, “and you’re on the wrong side of it. And your refusal to answer whether you were right or wrong about it is going to have an impact on judgment as to whether to vote for your confirmation or not. I hope you will reconsider the fact that you refused to answer a fundamental question about an issue that took the lives of thousands of young Americans.”

Hagel went on to explain some background, with McCain interjecting to inform that he knows the history behind it. With that, he moved on to Syria, which proved to bring more tense exchanges.

“I’m sure you’ve read in the newspaper that 60,000 have been killed,” McCain noted. “How many more would have to die before you would support arming the resistance and establish a no-fly zone?”

No one questions the “terrible tragedy” occurring there, Hagel said, but it’s a matter of “how best do we work our way through this so that we can stop it, to begin with, and then what comes next.”