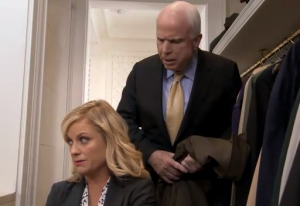 The season premiere of NBC’s Parks and Recreation featured cameos from not one, but three senators. First there were two of Leslie Knope‘s idols, Senators Barbara Boxer and Olympia Snowe. Later, an appearance by Sen. John McCain — whom a cranky Knope didn’t even bother to turn around and recognize.

The episode took place in Washington, D.C., where Leslie was disheartened after being unable to snag a meeting for her river cleanup project. Later on, attending a party with Ben Wyatt, Leslie was introduced to Boxer and Snowe, who are numbers two and 46 on her list of amazing women. But the meeting went a bit astray, as an emotional Leslie fled to the coatroom.

There, McCain came in to get his coat, and upon seeing Leslie, asked if she was okay. Whether he could do anything to help. With her back to the Senator the entire time, Leslie replied, “I would like you to just leave, and give me a little privacy please.” An apologetic McCain left her alone, leaving her to later quip, “Nosy people have no respect for personal space.

The clip below, via NBC: