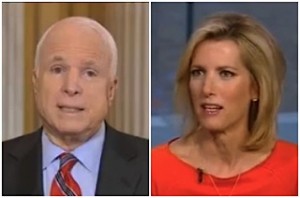 During an appearance on Fox & Friends Tuesday morning, Sen. John McCain pushed back against accusations from conservative radio host and Fox contributor Laura Ingraham that he had flip-flopped on his support for President Obama’s Syria intervention. McCain denied Ingraham’s premise before jokingly giving her the benefit of the doubt given her “vast knowledge of military tactics.”

“She feels as though you’re bailing him out of a misguided, confused policy,” co-host Brian Kilmeade said of McCain support of Obama. “Now when you come out to the microphones and say, ‘Hey, we got to support this,’ then people can’t understand where that came from.’”

“First of all, I didn’t say, ‘Hey, we got to support this,’” McCain said in response. “Second of all, I was encouraged when the president commits to increasing our support for the Free Syrian Army, for providing them with weapons that they need to combat Bashar al-Assad, and to degrade the capabilities of the Syrians to deliver these chemical weapons and other weapons.”

“So, I just beg to differ, I’m sure that with her vast knowledge of military tactics and strategy, she knows better than me,” McCain said sarcastically, before breaking out into a laugh to make sure everyone knew he was joking.