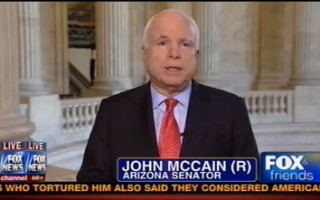 Senator John McCain appeared on Fox & Friends Tuesday morning, where host Brian Kilmeade asked for his reaction to the President’s attendance record when it came to intelligence briefings.

Well, I’m not too surprised. This was the same Senator Obama who said the surge would not succeed, that it was doomed to fail.

This was the same President who has pulled all of our troops out of Iraq without leaving a residual force and the place is unraveling. Al-Qaeda is making a comeback. The Prime Minister is in the pocket of the Iranians. They’ve just sentenced the Vice President to death. In Syria, he stands by and watches thousands being massacred without even saying a word on their behalf. They need weapons with which to defend themselves. They are being massacred, and this President does nothing. In Afghanistan, I’m telling you that it is unraveling there because all the President talks about is withdrawal and leaving. And you are seeing a resurgence of Al-Qaeda there. So as far as the middle east is concerned, this President’s national security policy has been an abysmal failure and I want to go back again to Syria.

How can you not speak up on behalf of these people who are being massacred by the hundreds every day using Iranian weapons, Russian weapons, Al-Qaeda and other terrorist organizations? It’s mind boggling. I have not seen a more feckless foreign policy since President Carter.

“I tell you what, he seems to be getting a pass on it,” said Kilmeade, adding that defense firms are going to be looking at “big-time downsizing.”

“Sequestration was a provision put in an attempt to get an agreement about reducing the deficit,” McCain explained. “It was a mistake and we should acknowledge that. Now we are staring at loss of a million jobs.” He criticized President Obama for “sitting idly by watching as this train wreck approaches” and being “AWOL.”