John McCain Questions Stand Your Ground Laws On CNN: ‘Something That Needs To Be Reviewed’
VIDEO

John McCain Questions Stand Your Ground Laws On CNN: ‘Something That Needs To Be Reviewed’ 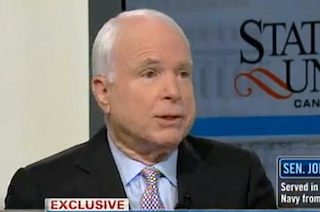 “Do you think Trayvon Martin got justice?” State of the Union host Candy Crowley asked Arizona Senator John McCain on Sunday morning, in a conversation that eventually led to McCain recommending that the much-criticized Stand Your Ground laws be reviewed in the many states that have them on the books.

McCain first affirmed the validity of the jury’s verdict. “I trust the judgment of a jury of his peers,” McCain said. “No one that I know of have said that this case was flawed, that it was corrupt, that there was anything wrong with the system of justice.”

“But you understand how it could be seen, as the President talked about, through a prism of the history of injustice?” Crowley pressed.

“Absolutely, I can see that,” McCain said. “I can also see that the Stand Your Ground law may be something that needs to be reviewed by the Florida legislature or any other legislature that has passed such legislation.”

Stand Your Ground, Florida’s permissive self-defense law, was initially invoked by George Zimmerman in the shooting of Martin, though his defense ended up not using it in his trial. Since the verdict the law has come under heavy scrutiny, with public figures like Stevie Wonder threatening to boycott all states with similar so-called “castle doctrine” laws.

“Do you think the Stand Your Ground in Arizona is worth looking at again?” Crowley asked.