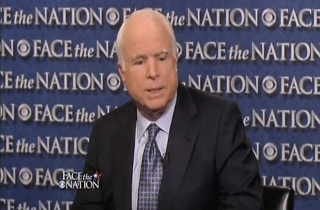 During a joint appearance on Face The Nation this morning, Senator John McCain and Senator Chuck Schumer expressed their displeasure with Senator Ted Cruz‘s plan to filibuster any potential gun legislation he does not like.

Schumer and McCain don’t agree on the heart of the legislation but both of them appeared to be agreement that the bills should make it to the floor for a vote.

“Please let us go to the floor. If we go to the floor I am hopeful that what I call the ‘Sweet Spot’ – background checks – can succeed. We’re working hard there,” said Schumer.

McCain has clashed with Cruz before so he was understandably more flabbergasted with his filibuster threat. “I don’t understand it,” he said.

“The purpose of the United States Senate is to debate and to vote and to let the people know where we stand,” he said.

Arizona’s senior senator did not mention Cruz by name even though it was clear it was who he was referring to. McCain was reluctant to commit to embracing any kind of new or expanded background check system. He said that it’s a subject that the American people, through the Senate, need to have a vigorous debate over.

Near the end of the segment the two senators discussed New York Mayor Michael Bloomberg‘s use of his personal fortune to advocate his anti-gun position. Both said that they supported Bloomberg’s right to use his own money to pay for political ads. The two Senators were staunchly opposed to the Citizens United Supreme Court ruling that permits Bloomberg’s unlimited political spending in the form of a Super PAC.

“I respect their rights to invest money and I am sure the television and radio stations in my state are appreciative,” said McCain

Schumer said that he thought Bloomberg provided a nice counterweight to the National Rifle Association’s lobbying efforts. “Why shouldn’t Mayor Bloomberg be allowed at least to give his point of view,” asked Schumer.

Watch clip below via CBS