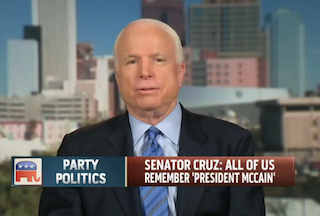 During his speech to the CPAC crowd on Thursday, Sen. Ted Cruz (R-TX) facetiously recalled “Presidents” Bob Dole, John McCain and Mitt Romney to make a point about how Republicans need to “stand for principle” in order to win big elections. Today, Sen. McCain fired back at Cruz during an appearance on MSNBC’s Andrea Mitchell Reports.

McCain said he spoke to Cruz about the comments and it was “cordial” but he took specific offense at the remarks concerning Dole. “He can say what he wants to about me and he can say anything he wants to about Mitt,” McCain said, “but when he throws Bob Dole in there, I wonder if he thinks that Bob Dole stood for principle on that hilltop in Italy, when he was so gravely wounded and left part of his body there fighting for our country?”

“Bob Dole is such a man of honor and integrity and principle,” McCain continued. “I hope that Ted Cruz will apologize to Bob Dole, because that has crossed a line that to me leaves the realm of the politics and discourse that we should have in America.”

Andrea Mitchell seemed equally offended by the comments directed in Dole’s direction. “We were playing some video of Ted Cruz and he was speaking like this,” she said, demonstrating the way Cruz gestures with both arms. “And I was thinking, if Bob Dole could have used that arm, his whole life would have been a lot different.”

In a statement sent to NBC News after McCain’s appearance, Dole responded to Cruz’s comments like this:

“Cruz should check my voting record before making comments. I was one of President Reagan’s strongest supporters, and my record is that of a traditional Republican conservative.”