John McCain: Obama Should Lead, Not Shop For His Dog
VIDEO

John McCain: ‘President Should Play Much More Of A Lead Role’ Rather Than Shop For His Dog 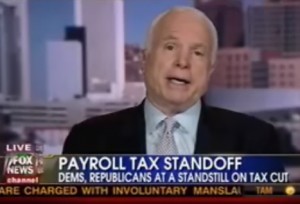 Arizona Senator and 2008 Presidential Candidate John McCain was a guest on Fox News Thursday morning, and — even though he’s already home in Arizona — he told Fox and Friends host Brian Kilmeade that he “hopes to be called back to Washington” to work out a compromise on the payroll tax cut standstill. But he doesn’t believe that anything will happen until President Barack Obama steps in and asks Senators and Representatives to come back to D.C. and hammer something out. So far, McCain has not been impressed with the President’s leadership on this issue.

“I think the president should play much more of a lead role, rather than go shopping for his dog,” McCain said, referring to President Obama’s visit to PetSmart on Wednesday. “Maybe call these people into the White House, as the previous four Presidents that I’ve served under would have done, and see if we can’t hammer something else out.”

McCain believes that the issue is hurting Republicans, and that Democrats “are exploiting it.” He bemoaned the fact that 160 million Americans are “caught in the crossfire” of partisanship, saying, “they deserve better from Washington.”

Kilmeade then switched to foreign affairs talk, and McCain, speaking on the troop pullouts in Iraq and Afghanistan, noted that President Obama may find himself in a quagmire if things go awry. For now, though, McCain intimated that the ending of the war is being exploited politically by the President. He did not mince words.

“Already, his re-elect committee is using this as part of the propaganda for his re-election and it’s really sad. And we’re making the same mistake in Afghanistan. It’s called leading from behind.”

Watch a clip of McCain’s interview below, courtesy of Fox News: