John McCain: Without Backing Immigration Reform, ‘Our Chances Of Being In The Majority Are Minimal’ 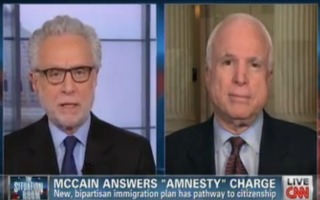 Sen. John McCain (R-AZ) joined CNN anchor Wolf Blitzer on Monday to explain his support for a bipartisan effort to reform the immigration system in the United States and provide a pathway to citizenship for the 11 million illegal immigrants currently residing in the U.S. McCain was asked if Republican support for this measure is driven, at least in part, by politics. McCain replied that there was some political consideration involved for Republican lawmakers because, without immigration reform, “our chances of being in the majority are minimal.”

Blitzer asked McCain if the decision for some high profile GOP senators to participate in a bipartisan reform process was driven by the political realization that the Republican Party cannot win a national election if the Hispanic vote turns out for Democratic politicians in numbers similar to the 2008 and 2012 presidential elections.

“I’m not sure if it’s quote politics, but it’s certainly the realization that if we continue to polarize the Latino slash Hispanic vote that the demographics indicate that our chances for being in the majority are minimal,” McCain said.

“I’m sure that this is a factor because many of us believe that they are a natural constituency of ours; small business, less regulation, big service in the military, pro-life, all of those reasons,” McCain added referring to Hispanic-American voters. “But this issue of illegal immigration has obviously been a major driving factor in the decision making of the Hispanic voter.”