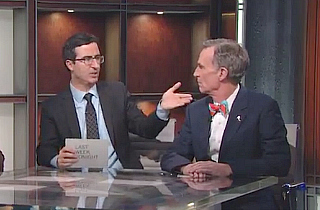 “Who gives a shit?” Oliver said of that particular Gallup poll’s findings. “You don’t need people’s opinion on a fact. You might as well have a poll asking: ‘Which number is bigger, 15 or 5?’ or ‘Do owls exist?’ or ‘Are there hats?’”

“The debate on climate change ought not to be whether or not it exists,” he continued. “It is what we should do about. There is a mountain of research on this topic.”

And yet the public continually expresses skepticism of the science, Oliver said, perhaps assisted by cable news’ insistence on depicting a one-on-one debate between a “skeptic” (or “some dude”) and a global warming “believer,” most typically Bill Nye the Science Guy.

“If there has to be a debate about the reality of climate change — and there doesn’t — then there is only one mathematically fair way to do it,” he said before turning to Bill Nye himself for a more “accurate” version of how the climate change debate should occur.