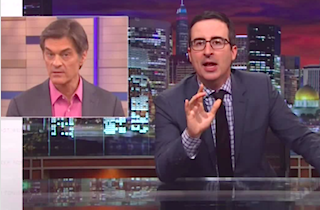 It was almost a year ago that John Oliver took Dr. Mehmet Oz to task for pushing “magic” cures on his daytime medical show. But now that Oz is back in the news, the Last Week Tonight host decided to follow up with a look at how the doctor is defending himself against attacks from his fellow physicians.

Oliver described Oz as a “quack who serves his viewers horseshit dressed up as medicine” and called his response to those claims “pathetic.” For instance, Oz has used his The Dr. Oz Show logo, in which “Oz” is big and “Dr.” is small as evidence that he does not host a “medical show.” But of all the ways Oz has pushed back against the criticism, it was the following that Oliver found the “weakest.”

“No matter our disagreements, freedom of speech is the most fundamental right we have as Americans,” Oz told his viewers last week. “And these 10 doctors are trying to silence that right. So I vow to you right here and right now: we will not be silenced, we will not give in.”

“No, you are scientifically wrong about that, as you are about so many things,” Oliver said in response. “Let’s be clear, the First Amendment protects Americans from government censorship and that’s it. It does not guarantee you the right to simultaneously hold a faculty position at a prestigious private university and make misleading claims on a TV show.”

Utilizing his own freedom of speech, Oliver told Oz, “You are the worst person in scrubs who has ever been on television, and I’m including Katherine Heigl in that.”