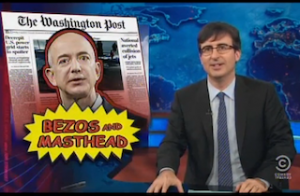 Wednesday night on The Daily Show, John Oliver tried to figure out why Amazon CEO Jeff Bezos decided to purchase the Washington Post. Is he trying to preserve his legacy, or is it all part of Breaking Bad-esque “front for a massive meth operation” His new name? “Heisenbezos.”

Oliver gleefully mocked the dying print industry, joking that the paper’s “14 print subscribers are already noticing one difference, because the paper now comes in ludicrously wasteful packaging.” But, he added, “I will say they’ve made it much easier to return the news if you don’t like it.”

To better understand where Bezos is coming from, Oliver turned to The Daily Show’s resident “deranged billionaire” John Hodgman. Hodgman didn’t buy the “legacy” argument, asking, “what greater legacy could there be than convincing Americans to subscribe to toilet paper?” Instead, Hodgman said it was because Bezos is a “poopy head.”

Hodgman went on to reveal his personal animosity for Bezos, primarily based on the fact that he just purchased his own Washington-based newspaper, to be renamed the “Washington Postier,” for $900 million. Mocking the new trend of billionaires buying newspapers, Hodgman said, “I’m going to disrupt the paradigm… You see, newspapers thought that people want to pay money for information. But we now know from the internet that what they really want is is their own opinions fed back to to them for free.”

When Hodgman suggested working intrusive ads for “Moxie soda” into his versions of the Post’s headlines, Oliver said “no serious news outlet would ever engage in that kind of shameless beverage branding.”

Hodgman replied, “Have you never seen the opening sequence of Morning Joe brewed by Starbucks?”