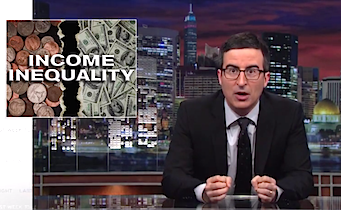 John Oliver delivered another one of his epic segments last night on a massive, complicated issue. But this time, instead of turning his focus abroad to something like the Indian election or zeroing in on a relatively arcane issue like net neutrality, Oliver took on an issue that directly affects every American: income inequality.

As Oliver explained at the top of the 14-minute segment, President Barack Obama indicated that he would make income inequality a central focus of his second term, but has since backed off due to divisions within the Democratic Party on how to talk about it without being accused of “class warfare.”

As the gap between the wealthy and the poor continues to widen, “the rich are just running up the score,” Oliver said. “If our economy was a Little League game, someone would have called it by now.” So why haven’t the vast majority of people in the U.S. who’s incomes have stagnated risen up to try to change things? Because of “America’s greatest quality: optimism.”

While a recent a poll showed that 65% of Americans think the wealth gap is increasing, “sixty percent also believe that most people who work hard enough, can make it,” Oliver explained. “Or, in other words, ‘Yup, I can clearly see this game is rigged, which is what is going to make so sweet when I win this thing.’”

He focused in on the estate tax — or, as Mitt Romney and other conservatives call it, “the death tax” — as the key factor that is keeping America’s wealth in the hands of the very few. Noting that the tax only applies to 0.14% of Americans, Oliver said, “Basically, if you’re not comfortable calling your accumulation of shit an estate, the estate probably doesn’t fucking apply to you!”

After showing bizarre clips of local news reporters giving advice to people on how to manage their imaginary lottery winnings, Oliver explained that if the economy is a lottery, Americans are increasingly playing “two different games.” In one, those with inherited wealth have a 100% chance of winning, and in the other, the machine that picks the numbers is not only filled with a disproportionate number of black and brown balls, it’s also broken.