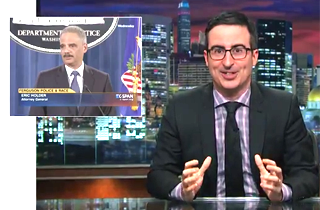 The release of the Department of Justice’s report into the Ferguson Police Department revealed a system that regularly abused the city’s mostly black residents for the sake of boosting city revenue. If you thought that this was an isolated incident, John Oliver has some bad news: it sure ain’t.

In a 17-minute segment about municipal fines — a.k.a. the “fuck barrels” of the American justice system — Oliver delved into how the practice disproportionately screws over people who can’t afford to pay initial fines, for things like speeding tickets and stealing a $2 can of beer, by burdening them with additional fees that eventually add up to many, many times the amount of the initial fine. (For instance, the guy who stole the $2 can of beer eventually had to pay $360 a month for his own tracking anklet, and “locked up three times” for failing to make those payments. Also, he has a tracking anklet for stealing a $2 beer.)

But even though it’s incredibly expensive to fine people, it’s still a major source of revenue for cities — as seen in a segment of the DOJ that Oliver highlighted, in which Ferguson’s city manager praised a police commander for noticing a really long line of people waiting to pay municipal fees. “The only people who should be that excited about people waiting in line to hand over way too much money are Apple executives,” Oliver noted.