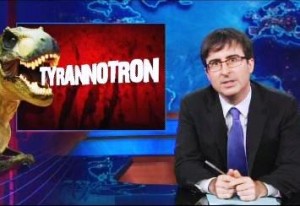 Daily Show correspondent John Oliver tonight began his three-month-long reign over The Daily Show, which he expected to be a news-free joy ride, by tearing apart the National Security Agency for its massive surveillance and data-mining. Oliver remarked that the government is monitoring “vastly more information than even George Orwell wet the bed over,” and reassured Americans, “Good news! You’re not paranoid!”

After lamenting how he’s been stuck with this heavy story when Jon Stewart‘s only been gone one day, Oliver mocked the PRISM program, particularly its logo, which Oliver said looks like a “Chinese bootleg of a Pink Floyd album.” He mockingly reassured everyone that the surveillance only affects the small group of us who “make phone calls or use the internet,” and said the Amish is feeling “really fucking smart right now.”

Oliver tore apart the lacking accuracy of how to tell the difference between an American and a foreigner, and likened the FISA court “rubber-stamp” approval to “American Idol with four Randy Jacksons.”

And Oliver’s concerns were not in any way alleviated by President Obama reassuring the public that Congress approved the program to, since “instead of being spied on by the exercutive branch, it turns out we’re being spied on by all the branches!” Oliver told Obama that the problem isn’t that they broke any laws, but “it’s a little bit weird that you didn’t have to.”