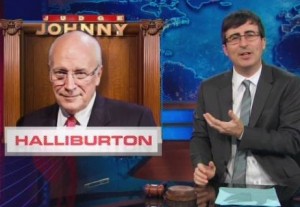 On Tuesday night’s Daily Show, John Oliver took his fake gavel and transformed into JUDGE JOHNNY, taking on a number of big legal cases happening across the country, from Halliburton getting off easy (again), Lance Armstrong being a giant douchebag (again), and Joe Biden getting blamed for a guy shooting his gun into the air (aga… actually, this is a new one).

With the aid of bailiff/announcer Jason Jones, Oliver first tackled the case of Halliburton destroying evidence in connection to the 2010 BP oil spill. Halliburton pled guilty and paid the maximum available fine, which was only $200,000. Oliver said, “You can ruin the Gulf Coast and destroy the evidence, and all for the price of four Toyota Avalons and half a semester at NYU!”

Oliver mockingly suggested they donated some money to “all those fish widows” and ruled that in the case of Halliburton vs. Any Sense of Humanity, Halliburton should “eat a bag of dicks.”

He then moved on to “noted asshole” Armstrong, who’s being sued by the Department of Justice for $120 million for cheating while being sponsored by the U.S. Postal Service. And Armstrong actually had the gall to blame the USPS for not knowing he was lying at the time! Oliver said, “He’s pleading so guilty it’s your fault for not knowing how guilty he is!”

Oliver tore apart Armstrong’s “world-record narcissism” and ruled that Armstrong is and remains a “giant douche.”

Finally, Oliver attempted to muster a straight face explaining how a man arrested for firing two shots from his shotgun into the air is actually blaming Joe Biden. It turns out Biden seriously recommended doing this, and Oliver had to admit, “‘the vice president literally told me to’ is a solid defense.”