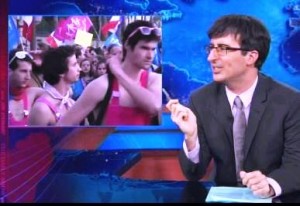 Daily Show guest host John Oliver tonight took on the social progress (or lack thereof) towards gay marriage rights in the United States and around the world. Between mocking Pat Robertson‘s odd phrasing and the rumors of a “gay lobby” at the Vatican, Oliver saved his sharpest barbs for the violent anti-gay protestors taking to the streets in France, marching in gaudy pink grab, leading Oliver to ask, “How is it that France’s anti-gay protests look so much gayer than our pro-gay protests?”

Oliver first tackled the Boy Scouts allowing gay scouts but not gay leaders, meaning that it’s okay to be in the scouts when you have gay urges “up until the age where they can act on them.” Oliver also mocked Robertson for declaring that gay people want to “do sex” with each other, while sharing his sympathies with an unsatisfied Mrs. Robertson.

But overseas, where people are “famously more enlightened” than Americans, France is erupting with anti-gay violence. Oliver explained that they’re just trying to protect the sanctity of marriage, which in France, is “one man, one woman, and her sister once, and her maid, and the college-age friend of their daughters who stayed for them of the summer.” Oliver also noticed how flamboyantly the protestors dressed, and asked, “How is it that France’s anti-gay protests look so much gayer than our pro-gay protests?”

Oliver also mocked anti-gay laws in Russia which would sentence people promoting homosexuality to prison (because “nothing reduces instances of homosexuality like a lengthy jail term”), and the Pope’s admission that there is a “gay lobby” in the Vatican. Though quite frankly, Oliver said, “the whole building is basically a Liberace fever dream.”