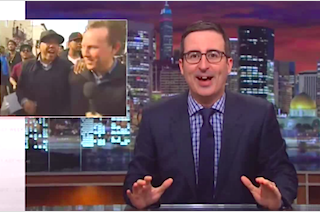 John Oliver opened Last Week Tonight this week with a quick review of everything that transpired in Baltimore over the last week, focusing on the often-uncomfortable media coverage by cable news. Specifically, the host zeroed in on that moment when both Fox News and CNN mistook record executive Kevin Liles for Def Jam founder Russell Simmons and refused to believe otherwise.

“It has been a delicate situation,” Oliver said of the Baltimore protests, “handled by the media with the deft, not-at-all-racist touch that they’ve become known for.” To Geraldo Rivera, who was the first to mix up Liles and Simmons, Oliver said, “You do realize that when African-Americans stand together as one, that doesn’t mean they are all literally the same person.” He then gave the Fox reporter a taste of his own medicine by mistaking him for a series of mustachioed celebrities.

“Why is everyone so insistent on finding Russell Simmons in the middle of this crowd?” Oliver asked. “Is there a prize for the first reporter to find him?”

The host then moved on to the case of a Baltimore protesters, arrested on charges of smashing a police car window, whose bail was set at an astronomically high $500,000. “The only explanation for his bail being set that high,” Oliver concluded, “would be that just like Geraldo Rivera and that guy from CNN, judges in Baltimore can’t look at black people without seeing millionaire Russell Simmons.”