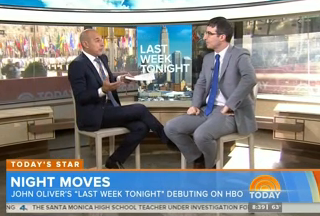 Ahead of this coming Sunday’s premiere of Last Week Tonight on HBO, John Oliver stopped by the Today Show Monday morning to tell Matt Lauer how the preparations are going and how he’s feeling about the new late night venture. “I’m excited and terrified,” he said. “I’m the appropriate amount of terrified and excited.”

Oliver discussed the difference between the nightly format of his previous home at The Daily Show or the network late night shows versus the weekly schedule he and fellow HBO host Bill Maher are doing. “I think we might look more internationally. We might look slightly deeper because we have the burden of more time,” he explained. “I’m used to the grind of doing things very quickly, working at The Daily Show, so I’m hoping it’s going to be a good thing, not a terrible thing having more time.”

Oliver also briefly weighed in on Stephen Colbert’s move to CBS’ Late Show next year, something that could have opened up an alternative spot for him on Comedy Central. With Colbert losing his right-wing pundit character for the move, Lauer wondered if Oliver might decide to lose that phony British accent.

“As you know, I was born and raised in the Bronx. So I’ve been kind of embodying this character and it will great to talk like I normally talk,” Oliver joked, segueing seamlessly into his best New Yorker voice.