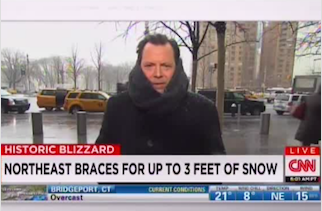 Rather than go after one of CNN’s easier targets on Last Week Tonight on Sunday, John Oliver chose to highlight the unique plight of weather reporter Chad Myers, who, according to the montage of clips below, appears to really “hate his job, his life and everyone around him.”

Whether he’s forced to stand outside in the cold without his proper winter gear or getting called in during Thanksgiving to update viewers on travel conditions, Myers is not the best at hiding his disdain for any given assignment.

His Twitter feed, too, reads as a bit of a downer. Here are some examples from just the past 24 hours:

Honestly could @nascar be any worse. Daytona 499. What a waste of 4 hours.

The @NWSKeyWest just followed me. I might call that piling on. Hurricane season only 3 months away. pic.twitter.com/RUkMd4ocYJ

And then there was this on Monday morning in response to one fan who asked if he had seen the Oliver clip yet:

@RealSJC I did not. It will be on youtube in a few days. Funny?

We didn’t want to make him wait any longer.