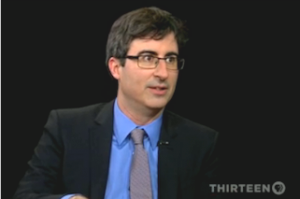 With just one week to go in his relatively short-lived time as interim host of The Daily Show, John Oliver appeared on The Charlie Rose Show last night to talk about how his expectations for the monumental task lined up with reality. “I knew it would be terrifying,” Oliver told Charlie Rose, “and it did not disappoint. I wasn’t sure it would be quite as much fun as it’s been.”

Oliver compared his seven years working as a Daily Show correspondent to working as a NASCAR pit crew member. “I know how the engine works, but I’ve never gotten to drive it before. And only when you drive it do you learn how fast goes.”

He agreed with Rose’s characterization of the show as a “finely-tuned machine,” saying it’s a machine that Jon Stewart “very strategically and intricately built himself.” Oliver summed up his time spent as host on the show like this:

“My main responsibility was not to destroy that machine in three months. That was the main responsibility. But, I guess it shows how well the machine works that he’s built, if you can have someone who does not have his skill sets, run it, and not crash it.”

Later in the interview, Oliver said of his own professional prospects after this experience, “I don’t think it’s going to change my life… There might be a time for me to have that mental conversation with myself, but I have been so concerned about not letting Jon down this summer because of everything he’s done for me.”