John Oliver Rips CNN’s ‘Royal’ Commentator: ‘Burn The Princess, For She Has Produced A Baby Of The Weaker Sex!’
VIDEO

John Oliver Rips CNN’s ‘Royal’ Commentator: ‘Burn The Princess, For She Has Produced A Baby Of The Weaker Sex!’ 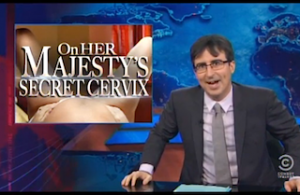 The royal baby is here, and who better to make jokes about the future king than Britain’s own John Oliver? The Daily Show‘s summer host promised far more coverage on the media’s incessant coverage of the royal birth tomorrow night, but did open the show tonight with a few gems of his own.

For the time being, the host focused in on one gloriously awkward reaction from CNN royal commentator Victoria Arbiter, who earlier in the day praised Kate Middleton for “brilliantly” birthing a son on her first try. “You are aware that she is married to Prince William and not Khal Drogo, aren’t you?” Oliver asked, alluding to Game of Thrones‘ powerful Dothraki warlord.

“What would your response have been if it had been a girl?” he asked. “Damnation upon your cursed womb, Katherine. Burn the princess, for she has produced a baby of the weaker sex. Burn them both! Burn them!” We will have to wait until tomorrow night for more.