John Oliver Savages Paula Deen Over ‘N-Word’ Controversy: She Might Just Be Suffering From Type-Two Racism 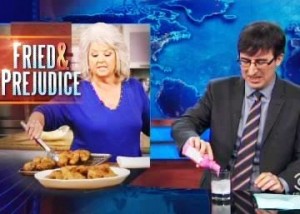 Oliver first took a swipe at Deen’s cooking by saying the n-word she used couldn’t have possibly been “non-fat.” When Deen was asked about ever using the n-word, she said that “of course” she did, to which Oliver said in her voice, “That’s just a given, come on!”

Oliver tried to defend Deen, suggesting “maybe the word just slipped out when she was rapping along to the Wu-Tang Clan.” And Oliver did admit that the idea of a plantation-themed wedding might appeal to Deen’s particular sensibilities, where “the bride and groom exchange slaves” and “the Union army comes through and burns everything to the ground.”

He took a dig at Deen’s diabetes diagnosis, suggesting they should just rename it the “Paula Deen syndrome,” before turning it over to correspondent Jessica Williams, who said that Deen suffers from either type-one racism (inherited) or type-two (“adult onset racism”). She said the second is what happens after years and years of indulging in too much Dixie nostalgia, and ended with a firing shot: “Paula Deen’s words aren’t hurting black people anywhere near as much as her recipes are.”