John Oliver Slams Florida: ‘Just Because You’re Shaped Like A Dick Doesn’t Mean You Have To Act’ Like One
VIDEO

John Oliver Slams Florida: ‘Just Because You’re Shaped Like A Dick Doesn’t Mean You Have To Act’ Like One 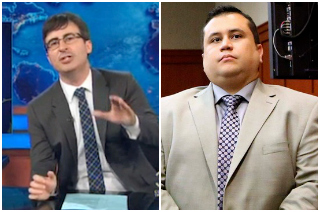 In his first show after a two week hiatus (nice life), Daily Show interim host John Oliver excoriated the entire state of Florida for the George Zimmerman verdict and the Stand Your Ground laws that surrounded the case.

“Has it ever occurred to anyone when visiting Orlando that when Mickey Mouse is waving at you, what he’s actually trying to say is, ‘Please get me the f*ck out of here, these people are f*cking crazy?'” Oliver said, after officially naming Florida “The Worst State.” “Florida, just becaue you’re shaped like some combination of a gun and a dick doesn’t mean you have to act that way.”

“Of the many truly depressing truly depressing things about this case—after a man was found not guilty after admitting pursuing and shooting an unarmed teenager—one was just how unsurprised people seemed about the verdict,” Oliver said. “That is what makes this so much worse: that we can get a verdict like this, not because the system has broken down, but because the system worked exactly as designed. How does 2013 Florida have a law that seems cut and pasted from 1881 Tombstone?”

“[The case] definitely has some racial undertones, if not racial overtones,” Oliver said, before playing a cringe-worthy clips from Zimmerman’s defense attorney, who argued that Zimmerman never would have been charged with a crime had he been black. “Yes, I suppose the one thing that our justice system is notorious for is how lenient it is on black people.”

Oliver tried to give America’s Wang the benefit of the doubt: “The fact is, whether we agree with them or not—and we don’t!—the Sunshine State does have very strong self-defense laws, including its famous Stand Your Ground provision. They may seem stupid—they do seem incredibly stupid!—but at least they’re applied across the board.”

He then played a clip from 2012 in which a Florida woman cited the Stand Your Ground defense after firing a gun into the air to scare off her abusive husband. She was convicted after only twelve minutes of jury deliberations and sentenced to twenty years in jail. Florida!

Watch the full clip below, via Comedy Central: