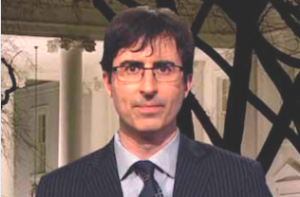 In just one week, John Oliver will begin his two-month stint as guest host on The Daily Show, as Jon Stewart takes the summer off to make his directorial debut with Rosewater set in Iran. It’s a risky move for the centerpiece of Comedy Central’s late night line-up and a big test for Oliver, who has served as “Senior British Correspondent” on the show for the past seven years but still has limited name recognition in this country.

Oliver spoke to Rolling Stone‘s Andy Greene about the challenges ahead and what he thought when he first got the offer to fill-in for Stewart. “Jon called me and asked, ‘Would you like to host the show?'” Oliver said. “My first reaction was, ‘Yeah, sure. Whatever you want. No problem.’ It was only on hanging up that my knees started to buckle. I was like, ‘Holy shit! What did I just agree to? I’m about to destroy the most beloved show on American television.'”

Over the past week, Oliver has been shadowing Stewart to get a preview of what to expect when he takes over on June 10th. “He’s an objectively funny man,” Oliver said. “But his management skills, which I guess people have no reason to take any interest in, are just incredible. He builds this whole machine, all the cogs which work to get this show on the air each day. It all comes from his management. He oversees everything.”

Asked if he thinks a Colbert Report-style spin-off is in his future at Comedy Central, Oliver demurred, saying, “I’m really aiming just to make sure I still have a job when Jon comes back. That I haven’t either destroyed the show or my role in it to such an extent that I’m still employed.”

Oliver said he’s not worried about a slow-news summer, especially with “three scandals in the White House, with rulings on gay marriage in the Supreme Court coming down and the immigration bill.” He also weighed in the big three cable news networks, though wasn’t willing to name a favorite. “They’re basically three catastrophically debilitating drugs. You are just rotating out to find a different vein,” he said. “They decimate you in different ways. You’re just dealing with different kind of lows. It’s literally the opposite of a drug. You’re chasing a different kind of low.”

Read the full interview at RollingStone.com.