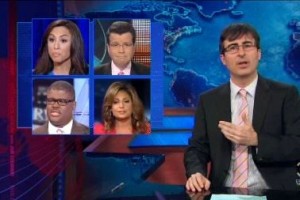 John Oliver spotlighted the plight of American fast food workers on Thursday night’s Daily Show and the plight of Fox News anchors who are very angry at them. Oliver tore into a number of Fox hosts and pundits criticizing fast food workers for striking to demand they get slightly higher wages, declaring the network to be really good for the “saying stupid stuff on television industry.”

Oliver broke down the objections these workers are raising, noting how McDonalds is so profitable, their golden arches are “literally 24-karat gold,” before mercilessly mocking everyone on Fox voicing an issue with what the strikers are saying. Oliver likened cable news to the fast food industry, in that “they sell you something that looks appetizing but leaves you feeling nauseous for hours afterwards.”

He shot down Andrea Tantaros‘s claim that workers would be getting more if only the Obama economy wasn’t so bad, mockingly agreeing, “Companies always pass on higher profits to their lower-level workers, that’s a fact!”

He took down Neil Cavuto and his past as a fast food worker (“the last job Neil Cavuto was actually qualified for”), and offered this bit of advice to anyone in the fast food industry.

“If any of these people happen to come into your restaurant, I’m not saying you should give them the special sauce, I’m just saying it’s pretty clear they deserve it.”