John Oliver Tears Into GOP Over Immigration Reform: A ‘Border Fence Built Out Of Ignorance And Spite’
video

John Oliver Tears Into GOP Over Immigration Reform: A ‘Border Fence Built Out Of Ignorance And Spite’ 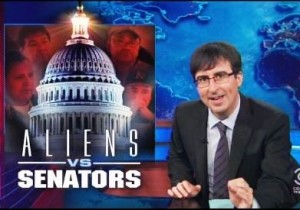 John Oliver opened tonight’s Daily Show tearing into the Republican party for their stubbornness in holding back immigration reform from becoming law. Congress, which Oliver said is in a “nail-biting three-way tie for least popular branch of government,” is set to take up a bill, but there’s been a lot of resistance in the GOP, which Oliver described as a “1000-foot high border fence built out of ignorance and spite.”

Oliver first applauded Republicans for recognizing the most important reason they need to get immigration reform done: they need the Hispanic vote. Of course, the Democrats are acting just as pandering, with one senator making a floor speech in Spanish. Oliver mockingly suggested, “Perhaps you would like to wash down your Latino pandering with a margarita.”

Of course, the GOP may take more convincing, because as Oliver put it, they’ll resist immigration reform like “a frat boy with a condom.” He also mocked Jeb Bush saying immigrants are more fertile, telling him he shouldn’t make his argument “They’re baby machines who love to fuck!”

Oliver also slammed Republicans for their demand that immigrants need to learn English, and for an amendment that would require 90 percent border security. In other words, as Oliver said, “Bring nine friends with you and get in free!”

But there’s a lot of momentum behind the bill… except for the fact the House isn’t taking it up yet. Oliver likened this opposition to “a 1000-foot high border fence built out of ignorance and spite” and predicted that the “chances of getting made into law seem to be no bueno.”