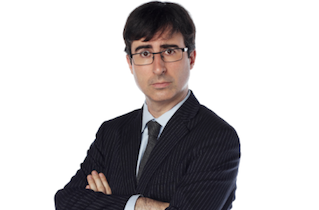 John Oliver will begin his summer gig guest-hosting The Daily Show on Monday, June 10, Comedy Central announced on Wednesday. Oliver will be filling in for Jon Stewart while he’s on hiatus to make his directing debut. He will return on September 3.

“Don’t worry, it’s still going to be everything that you love about The Daily Show, just without the thing that you love the most about it,” said Oliver, who is a regular on the show. His first week’s guests include Seth Rogen and CNN host Fareed Zakaria.

In March, the network announced that Stewart would be taking the summer off, allowing him the time to direct Rosewater, for which he also wrote the script. The film is an adaptation of the book Then They Came For Me: A Family’s Story Of Love, Captivity And Survival.

NEW YORK, May 1, 2013 – John Oliver will take over as guest host of “The Daily Show with Jon Stewart” on Monday, June 10 at 11:00 p.m. ET/PT. Oliver will serve as host of the Emmy® and Peabody® Award-winning series for the eight weeks of original episodes that are scheduled during Jon Stewart’s hiatus to direct his first feature film, “Rosewater.” Stewart will return on Tuesday, September 3. Scheduled guests for Oliver’s first week include Seth Rogen (June 10), Armando Iannucci (June 11), a musical performance by Mavis Staples (June 12) and Fareed Zakaria (June 13). Tickets for the summer tapings are available beginning today at www.thedailyshow.com/tickets.

John Oliver joined “The Daily Show” and The Best F#@king News Team Ever in 2006 and since arriving has done everything from interviewing UN Ambassadors to covering the World Cup in South Africa to breaking his nose fighting for the Confederate army. As a writer Oliver has won Emmy® and Writers Guild Awards and he won the Breakout Award at the HBO US Comedy Arts Festival in Aspen. He performs stand-up around the US and his one-hour special “Terrifying Times” debuted in April 2008. His stand-up series, “John Oliver’s New York Stand-Up Show” premiered on COMEDY CENTRAL in January 2010 with the fourth season slated to air in late summer. Along with Andy Zaltzman, Oliver also writes and stars in a weekly podcast, “The Bugle: Audio Newspaper for a Visual World.”