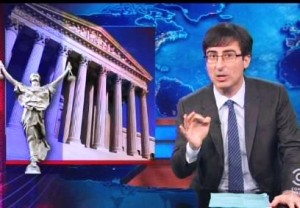 Oliver highlighted how that particular provision has been used 74 times since 2000, and mocked Texas for waiting not two hours before it used the Supreme Court ruling to say its laws are going into effect right away.

Of course, now the issue is in the hands of Congress, but Oliver didn’t find much to be hopeful about there, seeing as how Congress can’t even get basic pieces of legislation done right. The farm bill died in the House, leading Oliver to ask, “Why would they poke the heartland right in the cornhole?” Liberals voted it down because it cost too little, conservatives voted it down because it cost too much. Oliver likened this to the story of Goldilocks, only instead of there being a third, rational bear, “the first two bears tear Goldilocks limb from limb and eat her!”

However, Congress has been able to get some things done, like a 37th Obamacare vote that will die in the Senate, and an overwhelming majority voting in favor of electronic duck stamps. Oliver tipped his hat to Congress. “When it comes to passing borderline meaningless legislation, you’re the best around.”