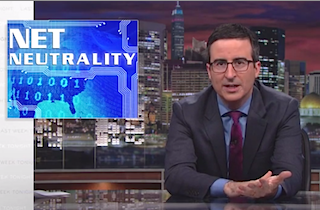 On Sunday night, Last Week Tonight’s John Oliver spent 13 solid minutes railing against the FCC’s new rules that could put an end to net neutrality. At the end of the segment, Oliver urged his viewers to take their complaints directly to the FCC through a new comment system the agency recently set up at fcc.gov/comments.

That URL appeared on screen behind Oliver for 40 whole seconds as he rallied the internet’s most notorious commenters to “focus your indiscriminate rage in a useful direction.” It looks like it worked.

For much of Monday, viewers who saw Oliver’s rant flocked to the FCC website comments section in such large numbers that they effectively crashed the site. This Reddit thread sums up the difficulties many people had just trying to get the page to load let alone successfully post a comment to it.

The problems were bad enough that the FCC posted two tweets apologizing for the “technical difficulties” Monday afternoon:

We’ve been experiencing technical difficulties with our comment system due to heavy traffic. We’re working to resolve these issues quickly.

We’re still experiencing technical difficulties with our comment system. Thanks for your patience as we work to resolve the issues.

Even 24 hours later, attempts to submit new comments are being met with this message:

A look at the FCC comments page shows there have been more than 47,000 filings under the “Protecting and Promoting the Open Internet” over the last 30 days, far more than any other topic listed on the website.

Interestingly, nearly as many people have viewed the 13 minute clip of Oliver’s segment on YouTube as watched the live broadcast on HBO Sunday night. As of Tuesday afternoon, the YouTube clip has nearly 780,000 views, while, according to Nielsen, Last Week Tonight was watched by about 1 million viewers at 11 p.m. ET on HBO.

Oliver’s impassioned plea for net neutrality in the face of “cable company fuckery” has not only resonated with viewers but driven them to take action. And now we know the FCC has heard them loud and clear.

Watch the full video below, via HBO: