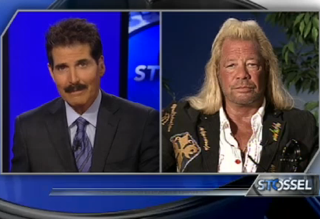 Even his strongest detractors have to give John Stossel this: he’s consistent about his free market principles– so consistent, he’s willing to argue there’s a case for weaning the government away from some law enforcement. For that, Stossel enlisted the help of Dog the Bounty Hunter last night, who argued that, at least in the business of catching suspects that abuse their liberties while out on bail, the government is costing taxpayers “hundreds of thousands of dollars” needlessly.

The theme of Stossel’s program this week was, aptly, “Defending the Indefensible,” as Dog (and economist Alex Tabarrok) was on the program to defend private law enforcement. The argument, even Stossel admitted, was quite unpopular among the average American, which is why he brought Dog and Tabarrok on to explain how much money could be saved, and how efficient the system could be.

“Are you better than the police?” asked Stossel, to which Dog replied earnestly that he wouldn’t say “better, but just as efficient– it doesn’t cost the taxpayers any money for us, bounty hunters, to arrest fugitives.” On the other hand, it “costs the police hundreds of thousands dollars to arrest one guy.” He added that bounty hunters have a much better incentive to catch criminals because “police get paid whether they find the guy or not,” while bounty hunters “must capture the guy, or we don’t get a check.”

Tabarrok added that statistics showed the efficiency worked on the part of criminals, also, as “if you have the prospect of a bounty hunter, someone like Dog coming after you, you’re much more likely to show up” to a hearing instead of flee, statistically. As for the humane concerns of having private citizens capture criminals, Dog argued the worst he would do is lie to a criminal to get them to show up somewhere, but he didn’t feel any “shadier” than the police. Plus, “we feel great when we take a criminal off the street… you catch one of those guys like that, you feel good about yourself.”

As the protection of citizens is one of the few legitimate jobs of the government– even for libertarians– so this will come off as a rather extreme claim for even regular viewers of the show. Arguing for that obligation to fall in the hands of the free market may just be the moment when Stossel crosses from staunch libertarianism to plain anarchy (though, to his credit, the argument isn’t in favor of eliminating the police, but of whisking away as much of their obligations as possible to the free market).