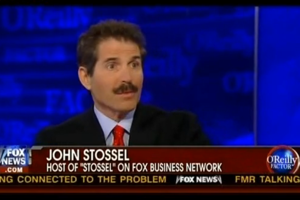 No one in the mainstream media has been as vociferous a defender of Kentucky Senate candidate Rand Paul than self-proclaimed “Voice of All Libertarians,” Fox News’ John Stossel. Last night, Stossel did his regular feature on The O’Reilly Factor to debate Bill O’Reilly on Paul’s well-known views on the Civil Rights Act, and he drew a strange comparison: either you support the rights of private business owners to discriminate, or you’re against women’s health clubs.

O’Reilly tried to challenge Stossel on his own turf, suggesting that part of libertarianism is giving everyone the right to the pursuit of happiness, even in sandwich form. In other words, by denying someone the right to purchase something at a private institution– say, lunch counters– the owner is infringing on that person’s liberty, therefore the government should intervene. “I want the government to basically give– or try to give– everybody the same amount of freedom,” O’Reilly noted.

Stossel’s reply seemed to take it a step further than Paul was willing to go, but still fell within the confines of the main theoretical libertarian argument: “We want the individual free to behave as he sees fit, and government is a clumsy instrument, and if you invite government into all parts of life to make it fair, we libertarians think that’s an awful idea.”

O’Reilly responds by noting that segregation in private establishments is “not equality, and that’s where the federal government has to come in and try to handle it.” So Stossel switched gears and gave O’Reilly some very strict hypotheticals himself– either you support segregation everywhere, or you support it nowhere. This sounds fair, right? Except what Stossel means is that banning segregation at lunch counters also requires banning women’s only gyms and health clubs, because it’s either all or nothing when it comes to individual freedoms. Or something.

Video of the discussion below: