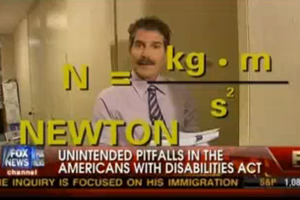 John Stossel‘s noble crusade against the Nanny State won’t end until every single unreasonable bit of legislation is rejected by the American people. Many times, this leads Stossel to tackle obviously ridiculous law, like the time he got himself a government subsidy for a golf cart. Other times, it leads to outrage over the Americans With Disabilities Act.

The ADA, argues Stossel, is simply tyrannical. For example, did you know that it requires businesses to have their doors conform to certain dimensions such that a disabled person in a wheelchair would be able to use it? This in itself wouldn’t be so bad if the doors weren’t also required to conform to standards of force when the close– that is to say, the door cannot use up more than a certain amount of Newtons as it closes. Bathrooms must also adhere to certain standards: mirrors, sinks, and toilets must all be of a certain height, and “if it’s an inch too high, some guy can wreck your life by coming into your business and suing.” Why can’t the government just stay out of our bathrooms?

Stossel’s argument is significantly more nuanced than that, and boils down to the core of most of his arguments with Megyn Kelly: “it’s the lawyers to blame.” Lawyers, he tells Kelly, are abusing the ADA in order to milk businesses through lawsuits. Besides that, he argues, the ADA has deterred the hiring of disabled people as employers are more wary of these lawsuits, and would prefer not to hire them. Then, to conclude, Stossel brings back the Rand Paul Civil Rights Act argument: “a business that doesn’t accommodate the disabled loses customers.”

Kelly puts up a good fight on that last point, arguing that the free market had its chance to prove that and ended up making it clear why a law would be necessary. On the lawyer point, though, she takes a detour to vent her frustrations about irresponsible plaintiffs and the lawyers “that go on TV” and make a living off of frivolous lawsuits, later to point out that during her tenure in the legal world, she was a defense lawyer for businesses that got sued, so don’t blame her for any of this.

The video from yesterday’s America Live via Fox News below: