John Stossel Takes Out His Tax Day Frustrations On His Accountant, Bob 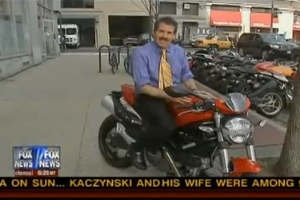 Tax Day is looming over America, and John Stossel celebrated by dedicating a major part of his weekly O’Reilly Factor appearance to railing against “Bob,” his accountant. Stossel owes Bob several thousand dollars for filling out his tax forms. To emphasize how much money the government forces him to spend on Bob just to avoid tax fraud, Stossel simulated activities he could have spent the money on instead, including eating steak at a fancy restaurant and riding a motorcycle.

In the pantheon of great Stossel moments on Fox News, this one ranks somewhere between the Glenn Beck green phone/scooter interview and the time he literally wore a ball and chain to his interview with Bill O’Reilly. During half of this interview, Stossel actually plays the straight man to O’Reilly’s radical libertarian who opposes enforcing speed limits. With even the Easter Bunny protesting electronic surveillance of highways in Arizona, Stossel warns that, while the traffic cameras are annoying, it’s important to pick the right battles.

Battles like the ongoing war with “Bob,” for example, a “23-year-old” accountant who is the bane of Stossel’s existence because government tax laws are so complicated that they force him to continue paying the man to fill out tax forms. People should be able to comply with tax laws without having to spend several thousands of dollars to make sure they don’t break any laws, he argued, before demonstrating what things people should be able to do with their money: