John Stossel: ‘Thuggish Chicago Shakedown’ Of BP Is ‘Not Democracy’ 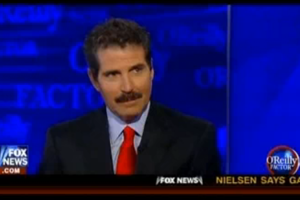 It seems that every time someone in the GOP expresses some radical libertarian idea, the rest of the party scatters as far from the person as possible. And like a brave firefighter to a burning building, John Stossel rushes in to save the embers of his beloved philosophy. He arrived on the O’Reilly Factor tonight with fistfuls of red-hot free market capitalism, calling the $20 billion BP escrow account a “thuggish Chicago shakedown,” by “Vladimir Obama.”

While Stossel didn’t defend BP CEO Tony Hayward, calling him and his corporation “despicable,” he was equally appalled by the fact that the Obama administration made BP agree to save $20 billion in an escrow account specifically for claims. “I disagree with you,” he told Bill O’Reilly, “that Obama was right to say we go in there with a machine gun. We have rules in America!”

Stossel affirmed that he believed the deal was a “shakedown”– no, a “thuggish Chicago Shakedown”– and despite disapproval from O’Reilly, who had no problem with BP officials being “roughed up,” Stossel was worried that it was a slippery slope. “What if next time, Fox News is evil, and O’Reilly is evil,” he argued, and Fox News was taken off the air? O’Reilly basically responded that he’d cross that bridge when we get to it, and that he didn’t believe the federal government would ever take him off the air. Stossel didn’t buy the argument and concluded that this type of deal “is like Venezuela, it’s thuggish, it’s not democracy,” and called O’Reilly a member of the “liberal media.”

Video from The Factor below: