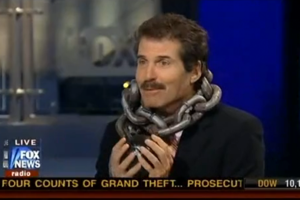 John Stossel is really betting his hat on the theory that props lead to ratings. On today’s America Live, he visited host Megyn Kelly to talk about the debt crisis in Greece in what is becoming a recurring outfit for him– a ball and chain coiled around his suit, which he uses to symbolize the “road to serfdom” that America is now on due to the increasing debt.

Kelly is usually cheery when greeting her guests, but all that she could muster today was an incredulous “Why are you wearing that ridiculous outfit?” at Stossel for his prop, and he was honest to admit that he “will dress in props to promote my show.” But his message was a much deeper one– that the United States could end up facing a debt crisis the size of Greece’s if spending continues at the level it currently is.

“We are on the road to serfdom,” he explained, “because government spending keeps increasing, we keep promising people more free stuff, we keep growing government faster than we grow the economy, and that is the road to serfdom.” We got on this road, he argued, because “our politicians decided this isn’t nearly good enough in the interest of fairness.”

Kelly challenges him to take on New York Times columnist Paul Krugman for his argument that the United States on its worst day will be better off than Greece because of the size and scope of its economy. “Krugman is just wrong,” he replies, showing a graph that predicts that by 2020 America could have a debt of the same size as Greece’s, relative to our economy’s size. He also argued that raising taxes on the rich would be dangerous (a solution Kurgman proposed) because there is always the possibility that “the rich could leave” at any time and damage the economy. Looks like we found who was buying up all those copies of Atlas Shrugged.

Video of Stossel on America Live below: