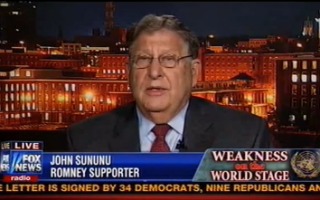 Romney surrogate and former New Hampshire Governor John Sununu appeared on HannityTuesday night, where he didn’t hold back when it came to sharing how he feels about the President’s foreign policy record, particularly when it comes to his having mentioned the “disgusting” film Innocence of Muslims several times during his U.N. speech earlier yesterday.

“Look,” said Sununu. “This is a president who is trying to hide the fact that we knew ahead of time that September 11th was going to be a horrible day, that poor Ambassador Stevens understood he was in serious trouble there, that we left him underprotected, and that the assault was not a demonstration. The assault was not a demonstration, but a well-planned military movement attacking on three sides with rocket-propelled grenades, and it was deliberately designed to be a September 11th assault. It had nothing to do with the video, and shame on this president for going back, trying to hide the facts by saying it over and over again in New York.”

Later, Sununu said that the “big problem” with Obama is that “he is absolutely lazy and detached from his job.”

When he doesn’t go and attend 60% of the detailed presidential daily briefings that come from the CIA and thinks he can just skim it, skim the summary paper on his iPad instead of sitting down and engaging in what I — I was in a white house with George Herbert Walker Bush. He took that brief every day. George W. Bush took it every day. And I believe that Bill Clinton took it every day. This President thinks he’s smarter than those guys and he doesn’t have to engage in the discussion. That’s the most important half hour of the day for a president who has to protect the security of the united states.

Contributor Joe Trippi then attempted to make the point that George H.W. Bush did not hold any bilateral meetings at the U.N. assembly when host Sean Hannity cut in and said he didn’t want to discuss it.

Take a look at what he had to say, via Fox News: