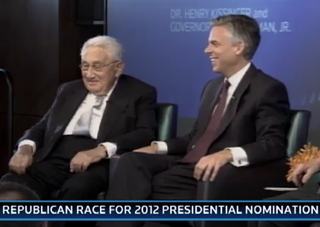 After months of speculation, several comical implosions, and two debates, former U.S. Ambassador to China Jon Huntsman was finally ready to announce today that he is ready to announce a bona fide presidential bid on June 21. Flanked by Sir Harold Evans and Henry Kissinger, Huntsman led slide at a Reuters event that he is planning an official entry next Tuesday.

Huntsman was at the event speaking to a small audience on international affairs, and when asked whether he was running, jokingly requested he be reassured that no one was watching. Given the nature of the “selective audience,” Huntsman allowed the news to slip that he would be throwing his hat in the ring sooner rather than later. Making the announcement in the company of such respected diplomats underlined Huntsman’s edge on most official candidates now in the race in matters of foreign policy. Most following the race consider Huntsman a potential frontrunner with major name recognition hurdles to jump, as well as having to explain to primary voters why and how he became a member of the Obama administration despite running for the Republican nomination.

Huntsman has also announced that the announcement will take place in Jersey City, New Jersey’s Liberty State Park, famous to locals for its astoundingly high crime rate, but known to the rest of the country as the home of the Statue of Liberty. While the aesthetics of the venue selection are obvious, the announcement has led to some level of speculation as to how New Jersey fits into Huntsman’s greater primary victory scheme, given that it is neither his native state nor one considered particularly amiable to Republicans.