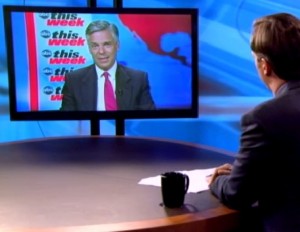 On Sunday morning, Former Utah Governor Jon Huntsman continued his quest to become the Republican Party’s presidential nominee on Opposite Day, swinging hard at frontrunner Rick Perry (R-TX) and the rest of the GOP field. In an interview with This Week fill-in Jake Tapper, Huntsman derided his fellow candidates’ lack of leadership, opposition to science, and even cracked wise about Perry’s history of secession talk.

Tapper followed up on Huntsman’s Twitter declaration, asking if he was serious when he said, “To be clear, I believe in evolution and trust scientists on global warming.  Call me crazy,” or was he just “being cheeky?”

Huntsman responded that he takes the problem very seriously, that becoming “the anti-science party” is a “huge problem.”

“I can’t remember a time in our history where we actually were willing to shun science and become a – a party that – that was antithetical to science,” Huntsman said.

Huntsman went on to criticize his Republican opponents over a “lack of leadership” in the debt ceiling debate, arguing that their willingness to allow a default would have been catastrophic. He also criticized President Obama, “who should have used the bully pulpit well ahead of time.”

His sharpest jab, though, was to Perry’s gut. When Tapper played him the clip of Rick Perry saying, of Fed Chairman Ben Bernanke, that “we would treat him pretty ugly down in Texas,” Huntsman quipped, “Well, I don’t know if that’s pre-secession Texas or post-secession Texas.”

Despite Perry’s large lead in Republican primary polls, Huntsman said he’s “not sure that the average voter out there is going to hear that treasonous remark and say that sounds like a presidential candidate, that sounds like someone who is serious on the issues.”

With poll numbers that have him neck-and-neck with Margin O. Error, Huntsman is playing his hand the only way he can. Eleventh Commandment be damned, Huntsman is staking out the “aggressively sane” niche. While that doesn’t seem like a strong hand right now, a lot can change in the next few months.