Jon Huntsman Tells Hannity Obama Is No Longer A ‘Remarkable Leader’: ‘He Has Failed’ 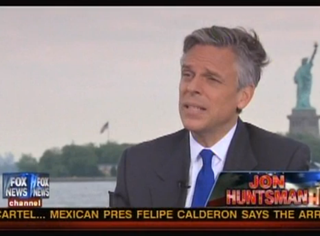 Newly-minted 2012 Republican candidate Jon Huntsman made his debut as an official member of the race on Hannity tonight, and as a former employee of Barack Obama had plenty of explaining to do. Huntsman didn’t hesitate in calling his former boss a failure, however, particularly on international affairs– noting America’s stature abroad has diminished significantly.

With the exception of a few specific economic questions, Huntsman kept the substance of his interview light– this being his first day out on the campaign trail– explaining that he decided to run for president because he felt he needed to defend “the sense of individual and personal responsibility that we can come up, pursue our dreams and aspirations without being blocked by government.” When Sean Hannity asked about a letter he sent to President Obama calling him a “remarkable” leader (artistically reproduced at “JonHuntsman.com” courtesy of The Daily Caller), Huntsman didn’t skip a beat in saying he no longer thought that. “I think he has failed in a number of ways,” Huntsman noted, particularly in international affairs. He did say that “I thought he was a remarkable leader for appointing a Republican” to a position like ambassador to China.

Hannity also asked Huntsman about his radical push for civility, and how he would challenge President Obama on the economy if he could not attack at all. Huntsman noted that there was a difference between attacking person and policy, and that he fully expected to attack on policy, but personal attacks were damaging the fabric of the nation’s culture. Children, he argued, “take those attitudes into the classroom” they see on TV, “and we wonder sometimes why our kids aren’t showing authority figures proper respect.” What’s more, “the rest of the world cares about how we conduct our affairs because they can take that lead,” and if American politicians have no respect for each other, the rest of the world will have trouble understanding why they have to respect us.