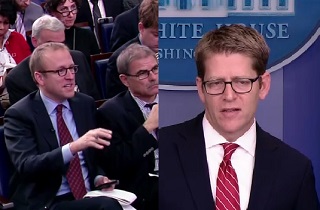 President Obama and First Lady Michelle Obama met with a group of Moms in the Oval Office Wednesday to “discuss the critical role moms are playing in helping their families access quality, affordable health care by encouraging their adult children, family members and peers to sign up for coverage,” according to the press office. At today’s White House daily briefing, ABC News’ Jonathan Karl asked Press Secretary Jay Carney if the White House is guilty of “gender stereotyping.”

“On the event with the moms, in the Oval Office,” Karl began, “you said ‘because moms play a unique role, moms have a unique role to play.’ I mean, are you… is there a little gender stereo…”

“Do you do what your mom tells you to?” Carney interrupted. “I do, mostly.”

“Absolutely,” Karl replied, adding “What’s up with dads? I mean, you’re a dad, do you have a role to play?”

“I wish I had that kind of power and influence over my children,” Carney joked, “but I don’t.”

He added that “I think this is a recognition of the role that moms play in their families, and they, I think, bear truths to their children, and one of the truths that we hope moms around the country will convey is that it is very important to get covered, get insured, to protect themselves against the potential of falling ill with a a debilitating disease, or breaking a leg, or anything that can befall young people who otherwise feel invincible.”

Carney went on to explain the benefits of the Affordable Care Act to young adults, including the ability to remain on their parents’ insurance until they reach age 26. He concluded that “In conveying all those messages, moms speak clearly, and best in many cases, to their children.”