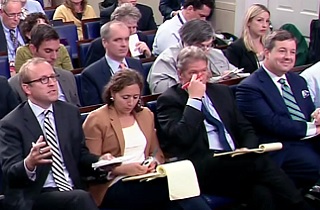 While watching Friday’s White House Daily Briefing on WhiteHouse.gov, my eye was drawn to the thumbnail for this weeks’s West Wing Week video, and I thought to myself, in faux-outraged wingnut voice, “Oh, so I guess West Wing Week is ‘essential,’ but death benefits aren’t, huh? Huh?!?”

“With apologies to Josh, can you explain to me how it is that West Wing Week is still being produced?” Karl asked. ” I mean, is that really a central government service that is not shut down as part of the shutdown?”

Carney was not as amused as I was, replying “I would refer you to the Office of Management and Budget in terms of what…”

“They don’t mention the weekly video webcast,” Karl cut in.

“Call the OMB,” Carney said. “But the communications office obviously is significantly slimmed down, as are so many offices here, but communications are a part of what we need to do at the White House.”

If Carney wasn’t exactly amused, at least Fox News’ Ed Henry was. You can see Ed glance over at Josh Earnest and give a knowing laugh as Karl asks the question:

These are things that Jon Karl surely already knew. He referenced the narrator of the West Wing Week videos, Principal Deputy Press Secretary Josh Earnest, in his question, so he knew Josh hadn’t been furloughed, and he was sitting in a briefing that was being televised on the White House website, which would require the cooperation of Deputy Director of Digital Content Adam Garber, who edits West Wing Week. Carney had covered communications staffing during the shutdown in a briefing the week before, in response to another question from Jon Karl. That means Karl was really just questioning the cost associated with editing a three-minute Youtube video.

But he wasn’t joking, not exactly. White House briefings are part journalism, and part performance art, because while truly newsworthy information is hard to come by, you can sometimes ask a question just to make a point. There’s nothing necessarily wrong with that. When I asked Jay Carney, in August of 2011, how President Obama would handle a debt ceiling threat in his second term, I didn’t really expect Carney to lay out a strategy for me. I mainly wanted to make the point that by negotiating with Republicans on the debt ceiling, the White House was inviting future such threats.

Your point, however, should be a worthy one.

Jon Karl’s point, apparently, was to make the White House’s priorities seem trivial by using what he knew to be a faulty comparison. The people who produce West Wing Week have already been established as performing essential duties, which include assisting Jon Karl. He knows that West Wing staff has been cut dramatically.

Taken together with his unrelenting attempts to balance out the White House’s position of political and moral strength on the shutdown/default, the worthiest notion I can think to attach to this is a misguided devotion to neutrality, masquerading as objectivity.