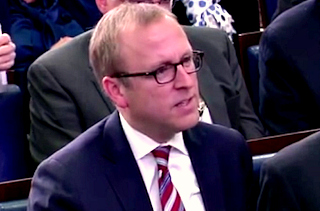 “The White House does continue to believe that a successful counterterrorism strategy is one that will build up the capacity of the central government to have local fighters on the ground to have local fighters take the fight to extremists in their own country,” Earnest said. “That is a template that has succeeded in mitigating the threat in Yemen and Somalia.”

“That’s astounding,” Karl replied. “You still see Yemen as a model? Building up a central government, which has now collapsed? A president who has apparently fled the country? Saudi troops massing on one border, the Iranians supporting the rebels? You consider this a model for counterterrorism?”

Earnest argued that the efforts in Yemen had tamped down on the terror threat against the U.S. and better positioned the government to fight insurgent groups, something Karl didn’t buy.

“We do continue to enjoy the benefits of a sustained counterterrorism security relationship with the security infrastructure that remains in Yemen,” Earnest said. “There are elements of the Yemeni government that we continue to be in touch with that continue to further our efforts to apply pressure to extremists that seek to operate in that country.”