Jon Karl Grills Trump Flack About Debate: Is Trump ‘Afraid of Facing Off with Bernie Sanders?’ 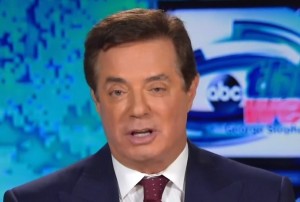 While Donald Trump‘s campaign manager was busy reassuring Chris Wallace that he doesn’t think Trump is bugging his own staff, Donald Trump’s other campaign manager was on This Week spinning a new excuse for Trump chickening out of a debate with Bernie Sanders. Host Jonathan Karl grilled Trump campaign manager and future Ben Gazzara one-man-show star Paul Manafort about Trump’s “flip-flop” on debating Sanders, which Trmup at first agree to, and then chickened out of.

MANAFORT: I mean we clinched the nomination the first week in June — in May.

…KARL: Now suddenly we hear Donald Trump is unwilling to debate Bernie Sanders. What’s going on? Is he afraid of facing off with Bernie Sanders?

MANAFORT: Hillary Clinton should be debating him today.

KARL: But this is a flip-flop. I mean you heard the tape. He — he said over and over again that he wanted to debate Bernie Sanders and then suddenly it was no.

MANAFORT: And he does. But he…

KARL: Nothing has changed.

MANAFORT: And he does, but he — well, what changed is he became the presumptive nominee — he became at actual nominee of the party between the time he said it and the time it happened.

Trump unofficially clinched the nomination this week when his total of delegates exceeded 1237 because some unbound delegates declared their support for Trump, which is not an official action that had any effect on Trump’s status.