Jon Lovitz To Megyn Kelly: People Have Called Me A ‘Nazi’ For Anti-Obama Rant
video

Jon Lovitz To Megyn Kelly: People Have Called Me A ‘Nazi’ For Anti-Obama Rant 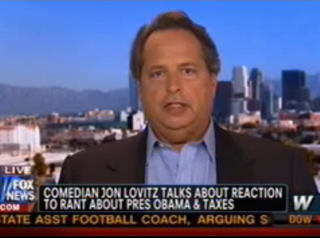 Jon Lovitz has become something of a political personality since his expletive-laden comedy rant against President Obama a few weeks back, and he still can’t quite believe the amount of feedback he has received. Lovitz appeared on America Live this afternoon to discuss his comments and explain just how people felt about them– mostly good, he explains, but being Jewish on Twitter apparently doesn’t bar people from calling you a “Nazi.”

Lovitz explained that his background wasn’t a lavish one, but middle class, where his father told him, “after college, you’re on your own.” He reviewed the situation– explaining an anecdote of himself yelling at the President through the TV screen over saying rich people “don’t pay their fair share”– and doing a podcast about it. “Like Arnold Schwarzenegger says, nobody stops you in America,” Lovitz noted, and he felt that spirit threatened by the attacks on rich people from the chief executive. “I said what a lot of people are thinking,” he told Kelly, and explained that “a lot of people are thanking me… they feel like they are being vilified because they are successful.” He noted that he said the President was “amazing” in the rant, but that would never make the news.

As for pushback, Lovitz went as far as saying it may have helped his career, and explained that he would “never tell anybody who to vote for.” “I think I’m a different kind liberal in that I think people should be true to themselves… if you’re Republican or Democrat or conservative, you should be that.” Saying he was not “qualified” to tell people who to vote for, he noted he had about 10,000 new twitter followers, and there, “people say you’re a racist, you’re a Nazi– I’m Jewish, I’m a Nazi now– I mean, that’s the most ridiculous thing i’ve ever heard!”